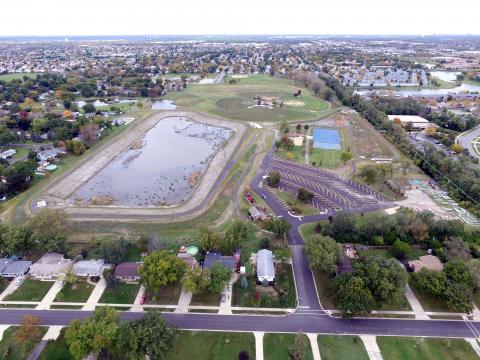 The Klein Creek Flood Mitigation Project was the preferred alternative from the Klein Creek Watershed Plan Addendum, approved by DuPage County Board in 2010. Design and permitting of this project began in 2011 and was ready for bid in 2013 with construction beginning in June 2014. The project is a collaborative effort between DuPage County Stormwater Management, the Village of Carol Stream and the Carol Stream Park District to reduce flooding for approximately 60 properties in the surrounding neighborhood that were subject to severe flooding in September 2008, July 2010 and April 2013. The project is a two-reservoir system that intakes water from the adjacent Klein Creek during flood events. The first reservoir in the system is a smaller gravity-operated reservoir that takes in water over a fixed, concrete weir. Once elevations reach a certain height in the smaller reservoir, they are pumped to the larger reservoir. Each of the two large pumps can pump at a rate of 20,000 gallons per minute. Once elevations in Klein Creek recede, the larger reservoir is dewatered through a 60-inch siphon that bypasses that surrounding neighborhoods and distributes the water back to the creek approximately half a mile downstream. In total, the reservoirs have a capacity to hold nearly 113 acre-ft of floodwater. The project also offers environmental features with native plants treating the floodwater in both reservoirs, as well as a wetland feature designed to collect and treat standing water outside of the basins. The County also paved new bike and walking trails, including nearly a mile stretch on the perimeter of the large basin, for recreational purposes throughout the park. This project had a BCA over 1.0 and was funded by DuPage County Stormwater Management and HUD Disaster Recovery Funds for a total project cost of $12.5 Million.

WBK was part of the consultant team providing civil design and working with the DuPage County on the successful completion of this project which has been awarded the following: