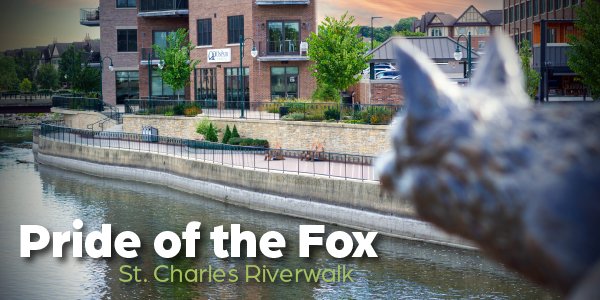 The Fox River begins just west of Milwaukee, Wisconsin, and runs 200 miles south before converging with the Illinois River. On its path south, it flows through downtown St. Charles, Illinois, where it has undergone a transformation to become a focal point and resource for the city.

“It wasn’t long ago that grocery store loading docks backed up to the Fox.. Now we have apartment balconies and community spaces that overlook it,” explains WBK Engineering President Greg Chismark. “It’s been quite the change.” This change didn’t happen by accident or overnight and represents a concerted and organized effort by the City of St. Charles to transform Fox River from its past as an industrial resource to a modern, community-based vision of the river as the center of the city’s commerce and community. 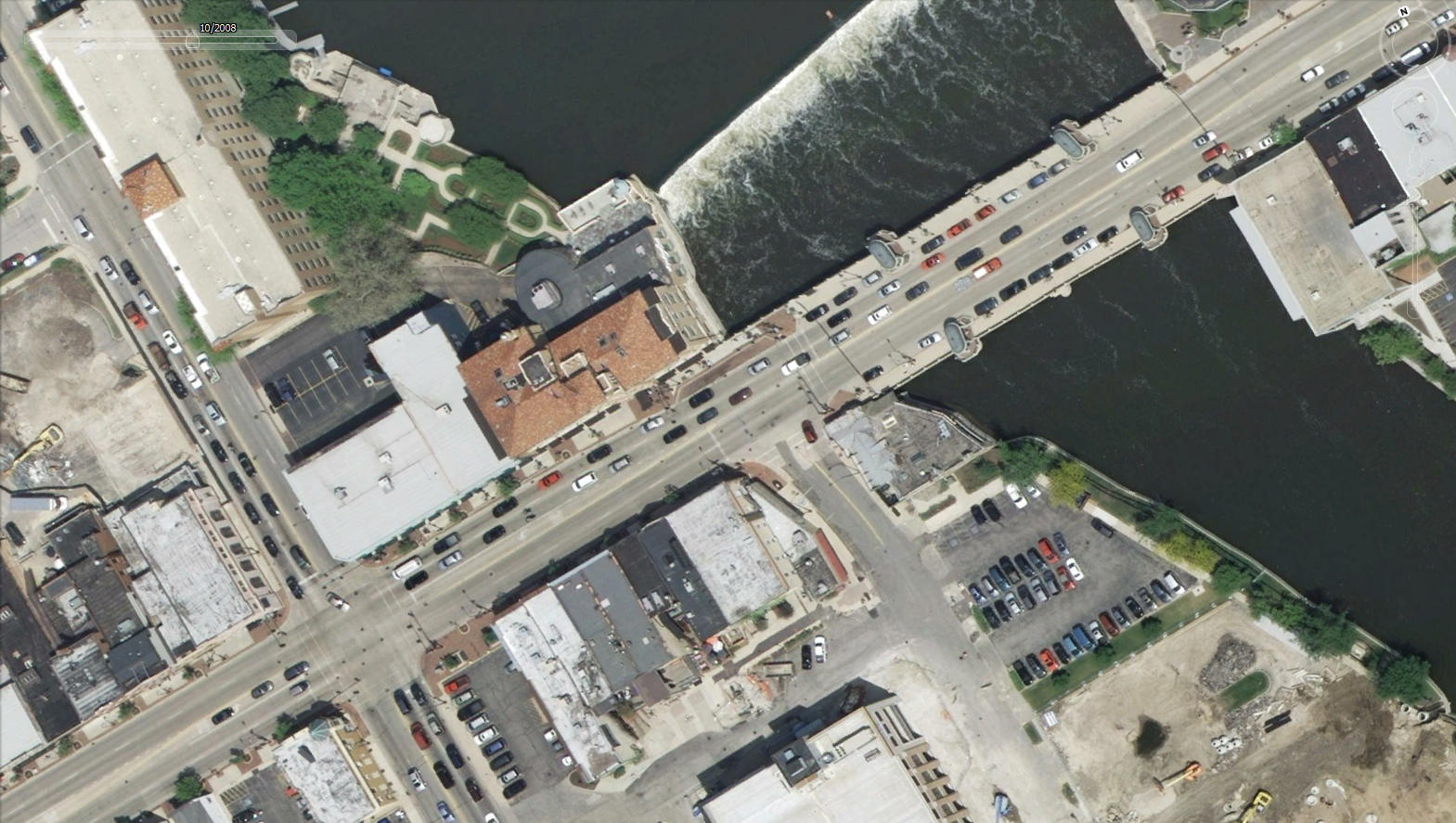 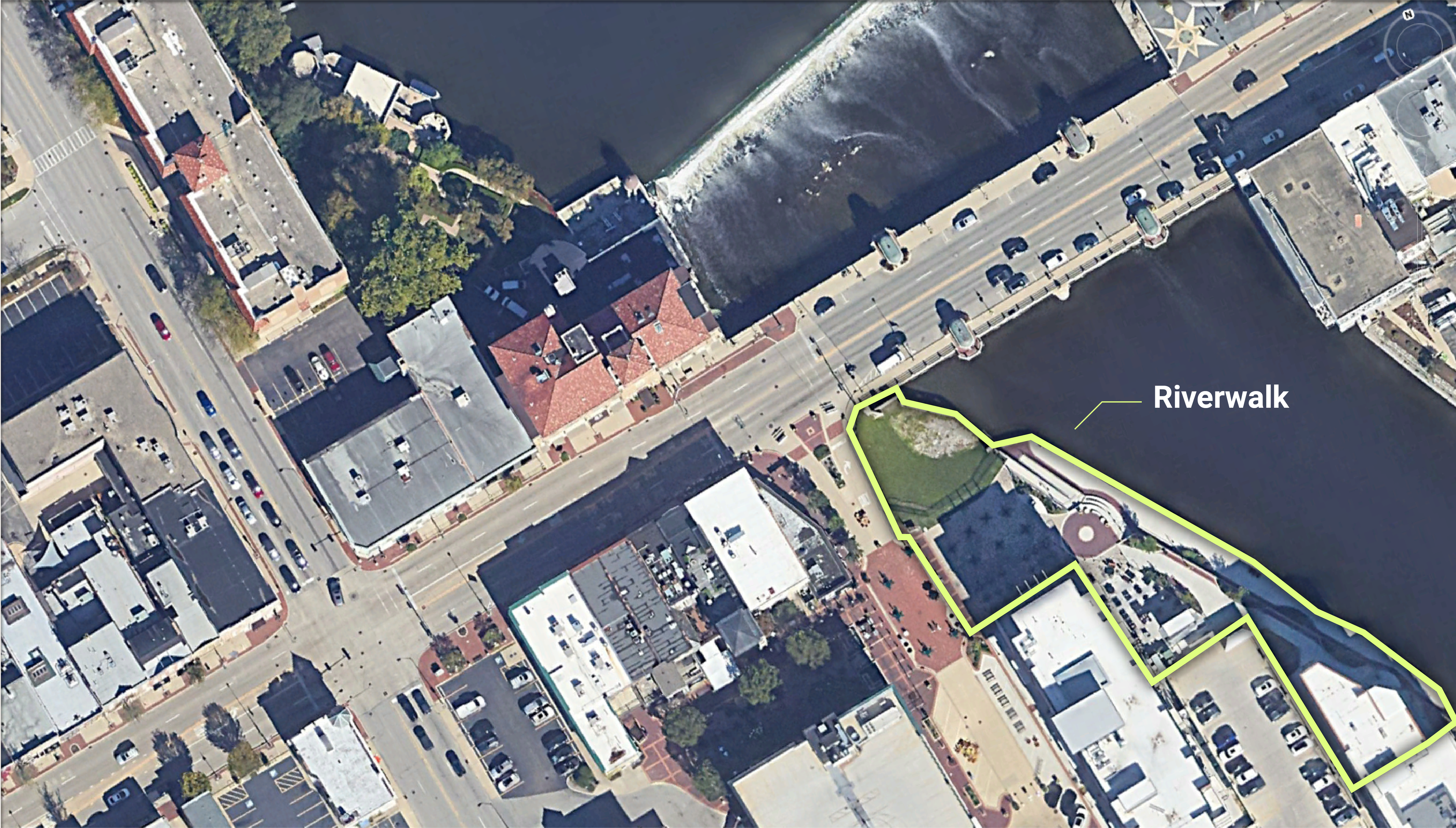 Making this vision a reality was no small task, and a comprehensive plan in the early stages was key. WBK was contracted by the City to review the Fox River flood model and engineers determined that there was an opportunity for additional development along the river, making expanded community spaces a possibility like never before. This remapping of the floodplain and floodway facilitated the City’s plans for a riverwalk along the Fox.

Connectivity of the riverwalk was important to the City and Chismark explains, “Pedestrian circulation is important from a public use standpoint. Paths are more likely to be used when there’s a perceived loop to easily return to where you started. It also has the added benefit of allowing people to discover new areas they might not usually explore, simply because the riverwalk loops through those locations.”

“It wasn’t long ago that grocery store loading docks backed up to the Fox.. Now we have apartment balconies and community spaces that overlook it.”

WBK’s responsibilities were wide-ranging, including creation of the construction documents, structural design of the retaining walls along the river, landscape design of planters, seating areas, brick pavers, and a rail along the riverwalk to protect the public from high river levels and fast-moving water. WBK collaborated with the City’s Electric Department to install a series of pedestrian lights for added security, safety and to extend the riverwalk’s accessibility into the late evening.

The Riverwalk has been effective in bringing more people downtown, allowing the adjacent First Street project to grow as both a commercial and residential area. By showcasing the river as its center, the City and WBK have infused new energy into downtown St. Charles, creating a focal point for the region.

Russell Colby, St. Charles Director of Community Development, describes the City’s partnership with WBK. “They’ve provided critical guidance and assistance over the years as the City has progressed on the First Street Redevelopment project, with a focus on planning for functional public spaces that can be efficiently constructed, and meeting standards and permit requirements for impacts along the Fox River.”

The Riverwalk is a point of pride for St. Charles, says Bob Rasmussen, construction manager collaborating with the City on development of the Riverwalk. “I spend most evenings on my balcony overlooking the riverwalk with its various elevations, planting areas and walkways. The design is truly special to our downtown and I could not be happier with the final layout. I am very proud of the work we performed together with the City of St. Charles and believe our citizens have benefited greatly from the design of this critical area in our downtown.”

"[The path] also has the added benefit of allowing people to discover new areas they might not usually explore, simply because the riverwalk loops through those locations.”

The First Street public/private partnerships have become successful, with talented professionals coming together and overcoming challenges to solidify the city’s identity as a thriving river town.

Another significant element of the revitalization efforts has been the addition of plazas on the east and west sides of First Street, creating dining opportunities, a performance area, festival and event venues, and space for art right in the heart of the city. Future expansion of public plazas is anticipated along with improved connectivity from Main Street to the First Street riverwalk. Marty Serena of Serena Sturm Architects has been integral in developing the vision to close 1st Street from Main Street to Walnut Street to create additional pedestrian and public space.

“The Plaza has become the central gathering place of our community,” comments Serena, “showcasing the vibrant core of our civic, economic and ecological qualities for our entire community and visitors to enjoy.”

“I am very proud of the work we performed together with the City of St. Charles and believe our citizens have benefited greatly from the design of this critical area in our downtown.”

WBK is again collaborating to provide civil engineering expertise for this future improvement, including  managing the relocation of utilities, additional landscaped planters, structural design and replacement of existing retaining walls, management of drainage and coordination with significant architectural elements – all with a focus on sustainability.

The first phase of this future plaza began when the City purchased the former Manor Restaurant site in 2020. The restaurant building had been demolished, except for a portion of the exterior foundation along the river. The existing wall was determined to be unsuitable for future plaza construction. Rather than remove the wall, which would have been costly with potential environmental impact, WBK developed a soldier pile wall solution allowing a cast in place concrete wall directly adjacent to the existing Manor restaurant wall. This concept minimized cost, permit time and maximized public space for the future plaza.

The concrete wall has the same aesthetic treatment as the riverwalk wall to the south, consisting of a rock faced form liner and stained concrete to emulate the existing stone river walls.  The project was recently completed by Martam Construction.

“[WBK has] provided critical guidance and assistance over the years as the City has progressed on the First Street Redevelopment project, with a focus on planning for functional public spaces that can be efficiently constructed, and meeting standards and permit requirements for impacts along the Fox River.”

It’s experience like this that Colby finds value, “The City has relied on WBK’s expertise to effectively navigate the regulatory steps and develop plans that the City has been able to execute. They are a valuable and reliable partner for the City’s development-related engineering work and have offered creative design solutions that have helped make 1st street a standout downtown project.”

The space won’t remain empty for long, as it has been filled in to bring it to ground level, and efforts have begun to create an inviting green space to gather in between shopping, dining and otherwise exploring the vibrant downtown area. Future plans for this space include an expansion of the existing plaza, solar pergolas, permeable pavers, and additional art installations.

Additionally, a portion of 1st Street will transition from a roadway to a pedestrian walking mall and community space to gather, shop and relax. WBK Engineering developed civil and structural plans on behalf of Serena Sturm Architects, and Martam Construction was tasked with making it all happen.

“WBK has been a wonderful partner and a pleasure to work with on the First Street Plaza endeavor,” says Serena. “Greg and his team are quite talented, knowledgeable, and very conscientious in their efforts. Quality design is a dance between art and technology, and we very much appreciate our partnership with WBK in the development of the plaza. We truly feel that their work will push this project to high levels of creative engineering and execution of our work.”​​

The First Street project has revitalized downtown St. Charles living up to the City’s motto “The Pride of the Fox”. Chismark shares the same pride for WBK’s contribution. “It’s extremely gratifying to create meaningful public spaces and private opportunities, no matter the location. But there’s an extra feeling of pride when you’re able to make a positive impact and see it on a daily basis. Much of this work is right outside the doors to our office, and it’s not uncommon for our employees to spend their lunches or after work in these same spaces we helped develop. We appreciate the opportunity to be a partner with the City, culminating in special projects that have a positive impact on the region.”